Although the Covid pandemic and the new Omicron variant continue to headline in the news, the most significant event here at Press Mains has been Storm Arwen. Hitting the coast near us at St Abbs at 120 mph, the impact of these winds and the heavy rainfall coming from the North wrought havoc to woodlands, bringing down hundreds and hundreds of trees, wrecking power and phone lines.

Waking up on the morning of Saturday 27th November, we surveyed the damage. Of the line of ancient beech trees at the top of the farm, many had fallen with huge roots pulled from the earth. Scots pines had come down all along the edges at Hill End and Gallowslaw. Tall trees in softwood plantations lay like piles of matchsticks. Everywhere we looked there were fallen trees, decimated forestry and heartbreaking devastation. 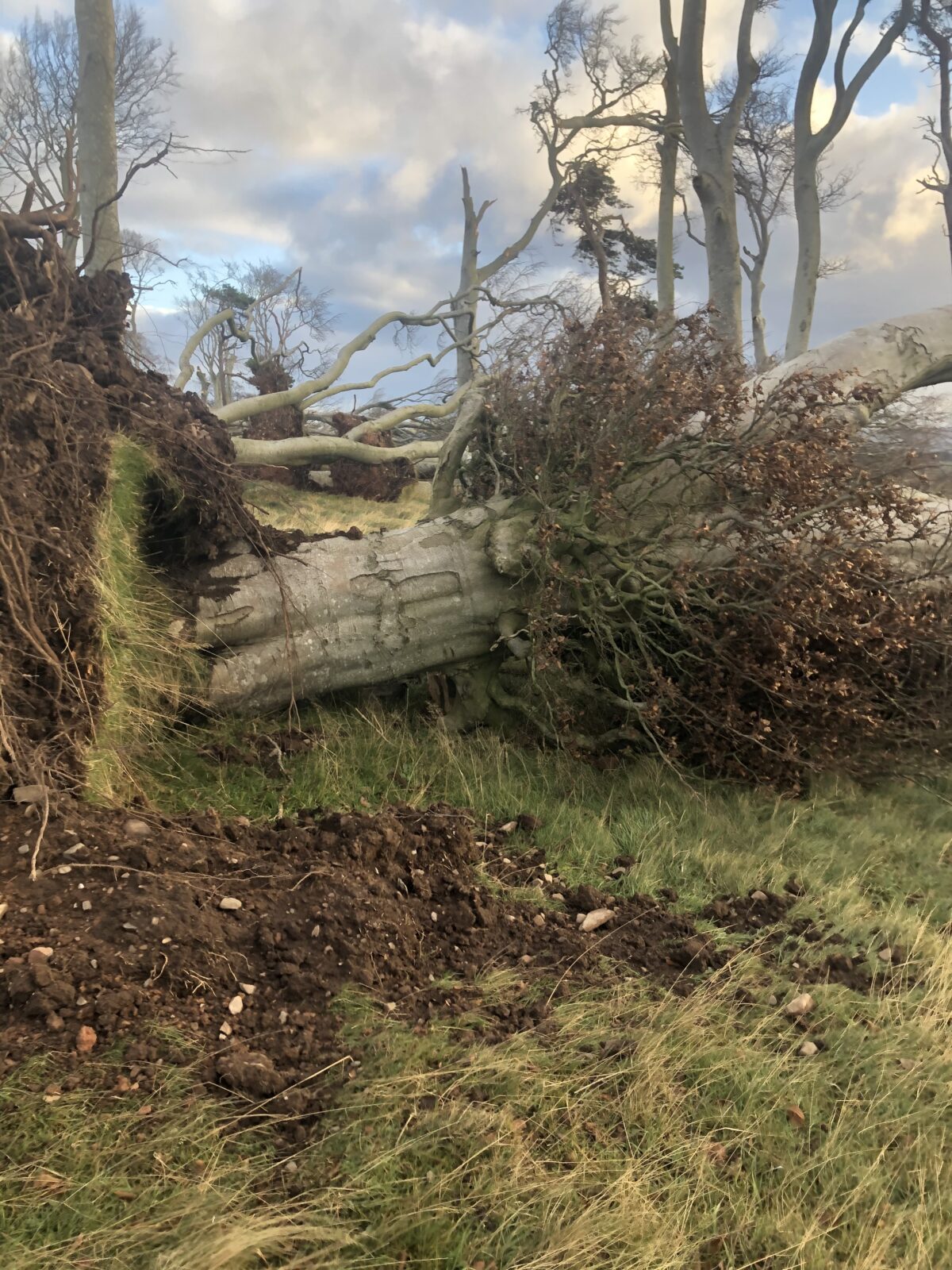 So, on the morning following the storm, we did what we could. John and Craig set out with chainsaws in hand and started about clearing the road to the farm. They then spent the subsequent days clearing our neighbours’ roads as well as our own tracks and field edges where trees had fallen. 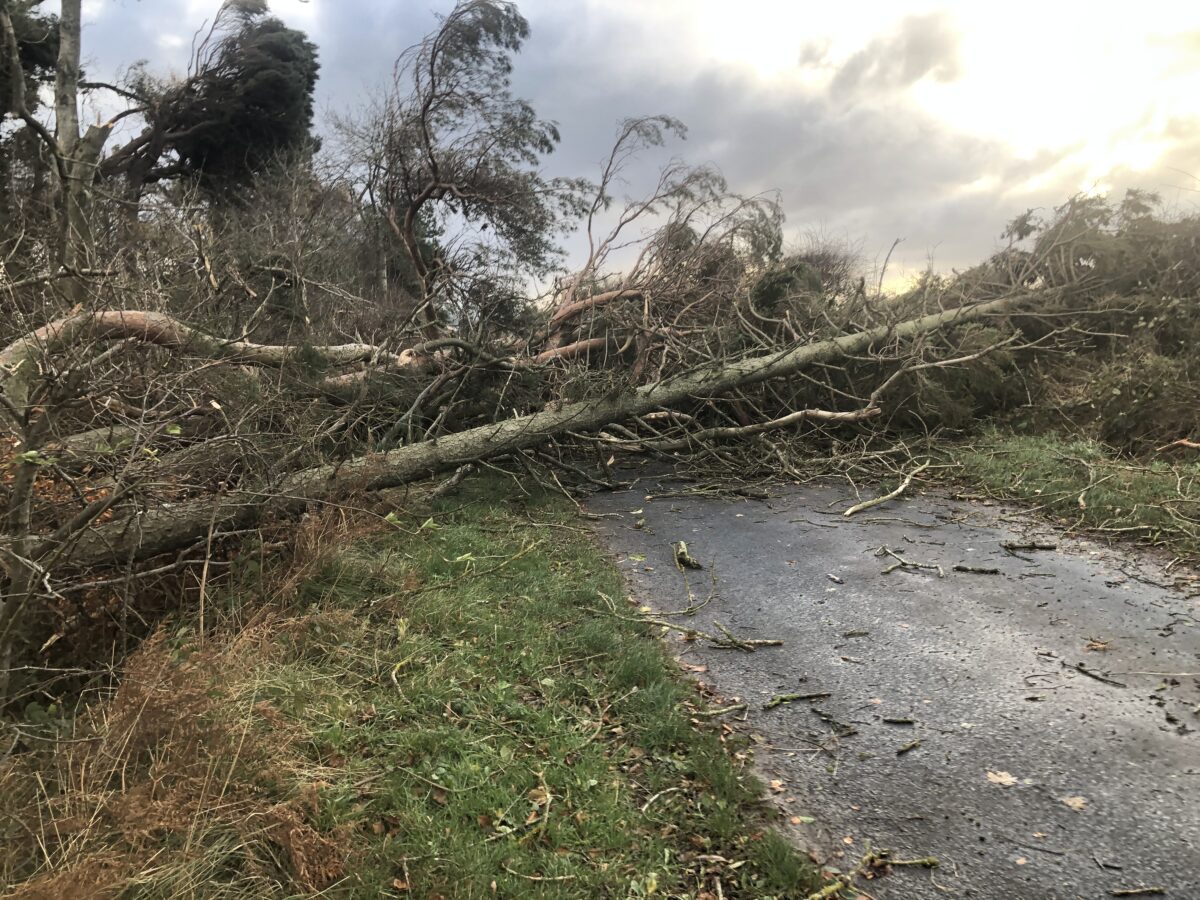 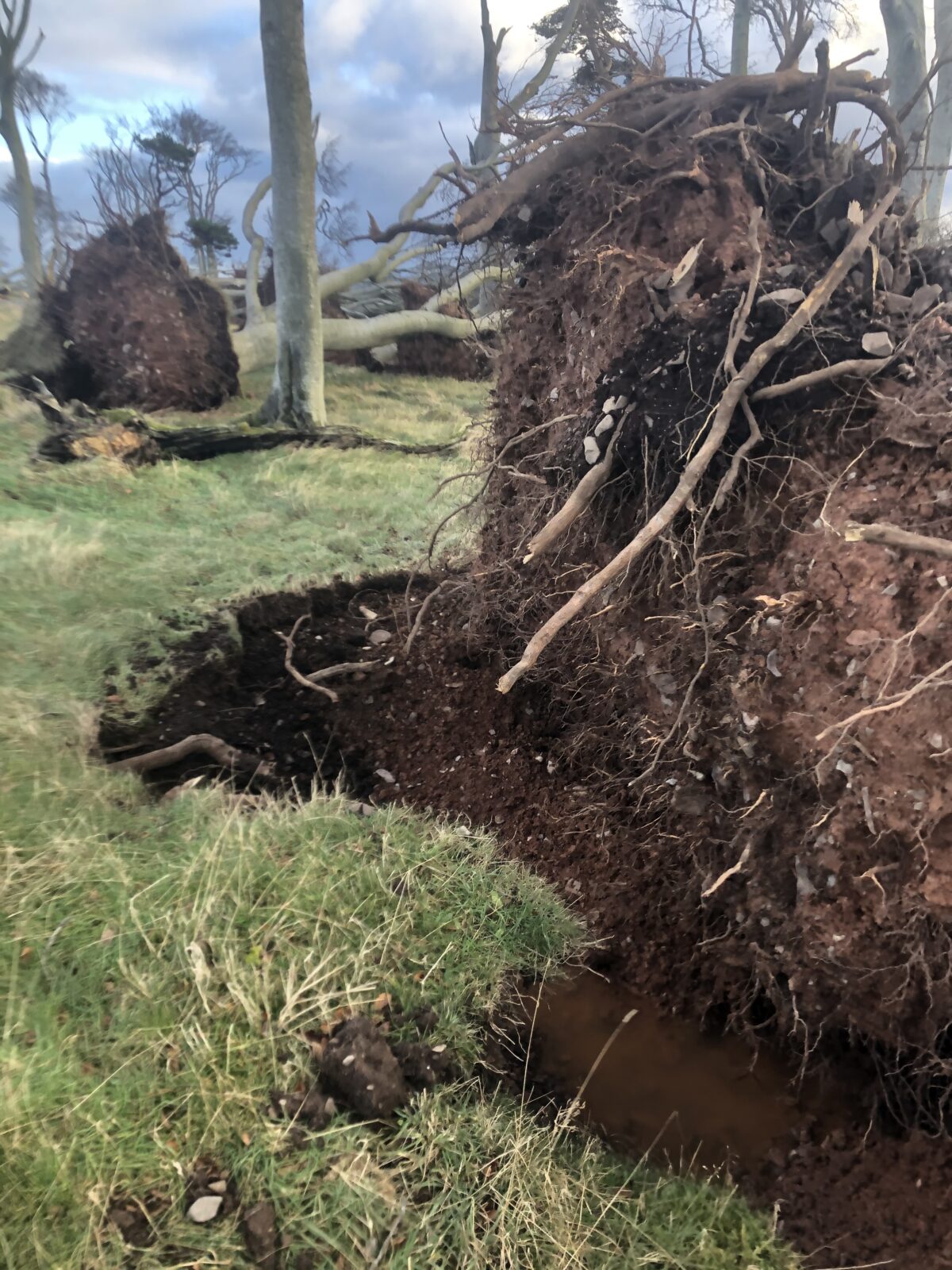 Thankfully, the buildings and cottages were largely unaffected, with only minor damage which was easily repaired. However, the damage done to power lines made life rather grim and for the five days we were without power, internet or phone signal. In addition, the biomass boiler which was unable to cope with the surges of power during the height of the storm, had shut down completely. 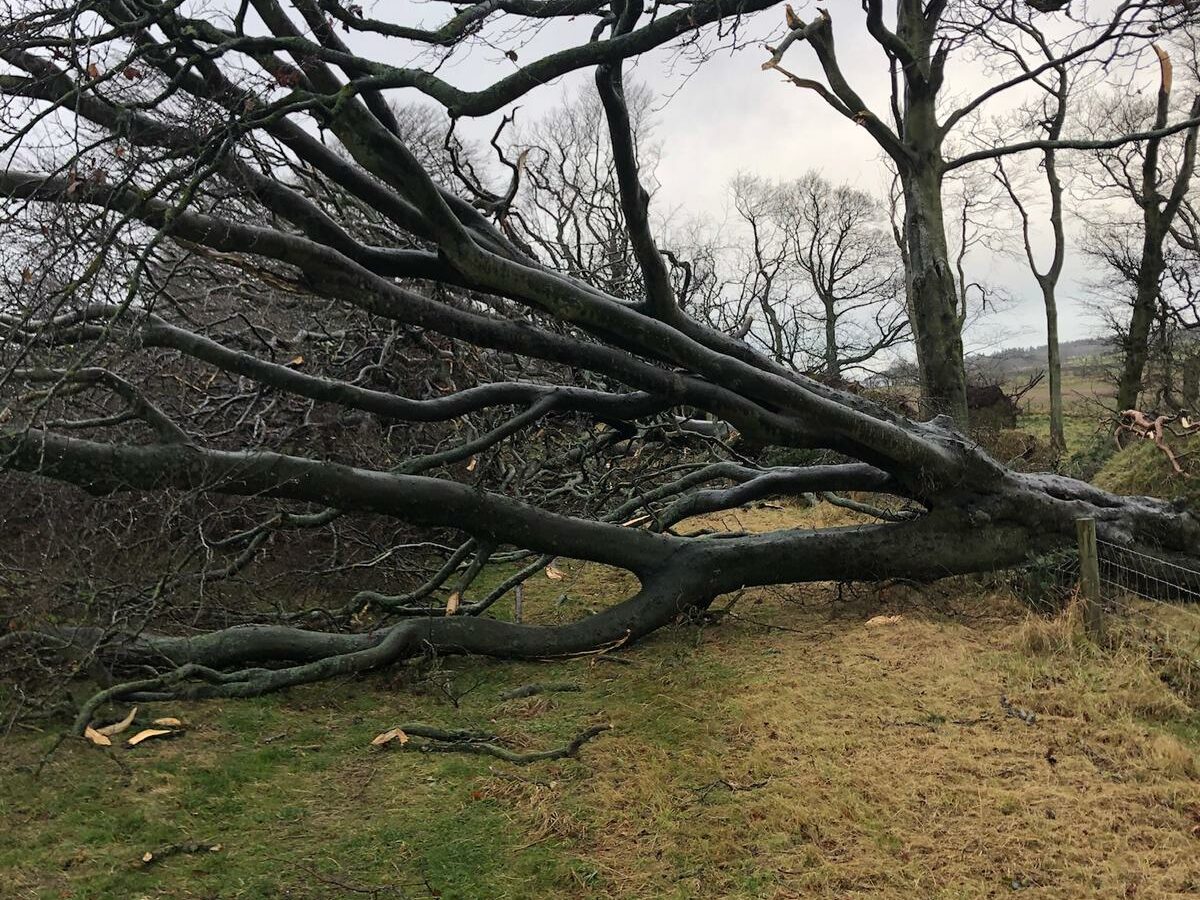 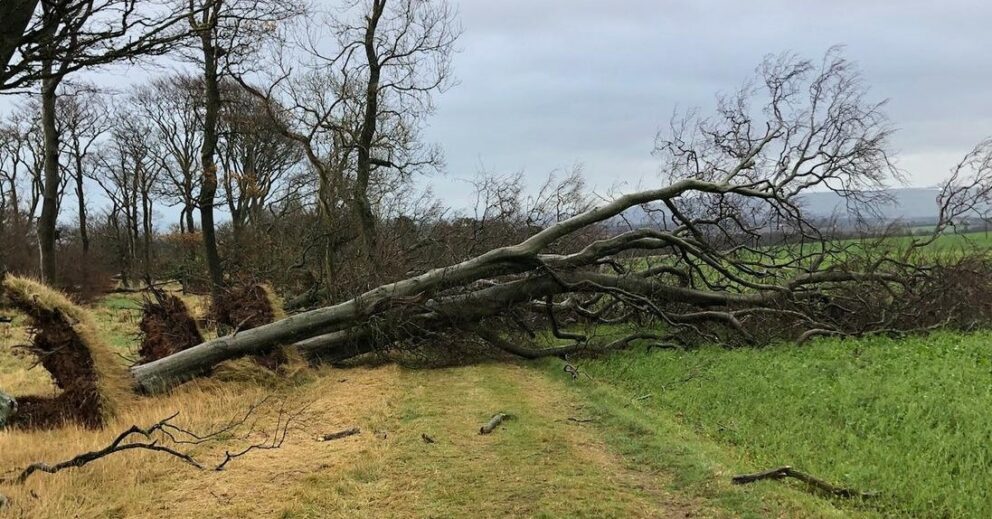 After a couple of days John announced, in true Jaws fashion: ‘We need a bigger chainsaw’ because of the sheer size of the trunks and the scale of the operation. Not surprisingly, there were none to be found in the area but John’s son-in-law Rob was able to source one in Somerset and had an epic 28-inch blade chainsaw sent up.

With an estimated two inches of rain falling in one night, the ground was completely waterlogged, making it impossible for conventional tractors to travel. The tree-clearing cavalry came in form of Roy, who has done a lot of drainage work at Press Mains, and appeared with his caterpillar-tracked digger which was able to skip over the deep mud of the field edges and tracks, clearing many fallen trees which would otherwise have lain for months. 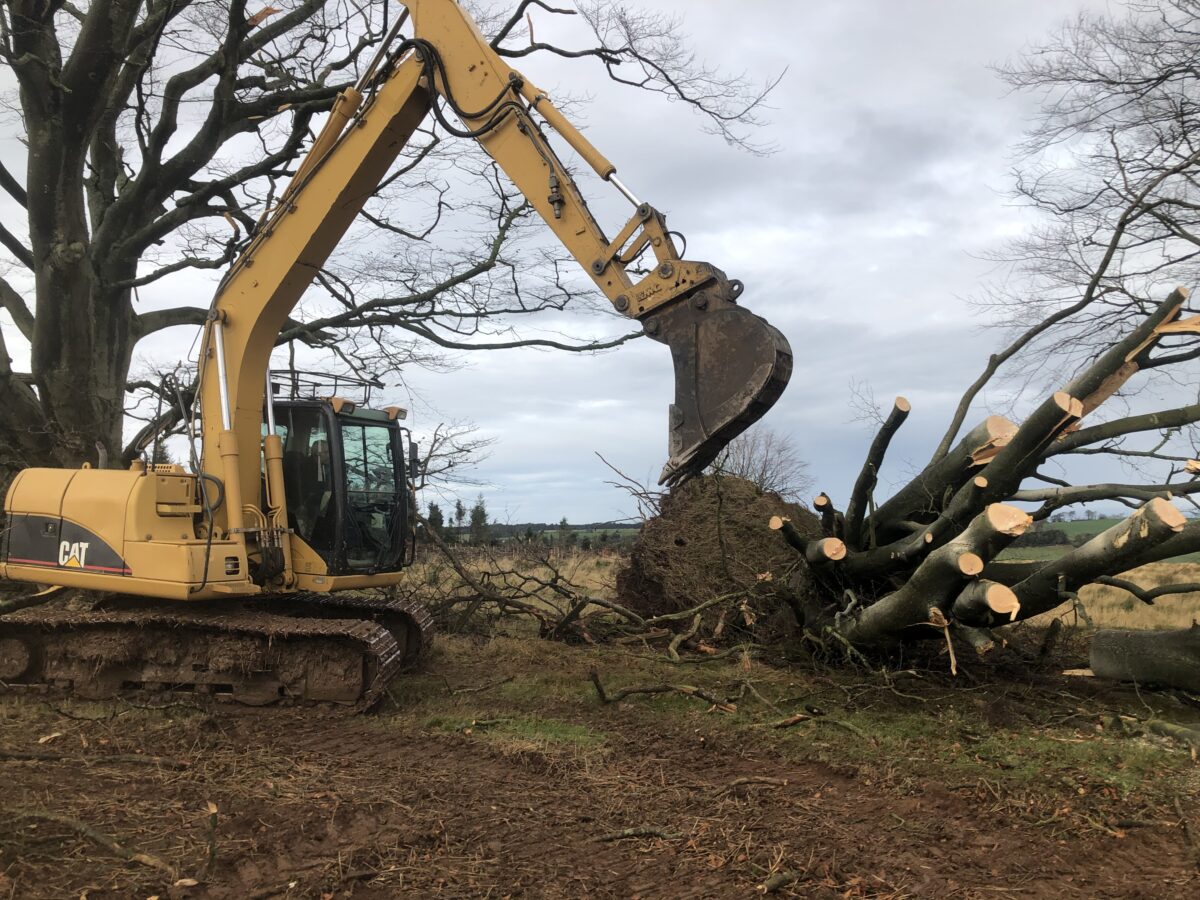 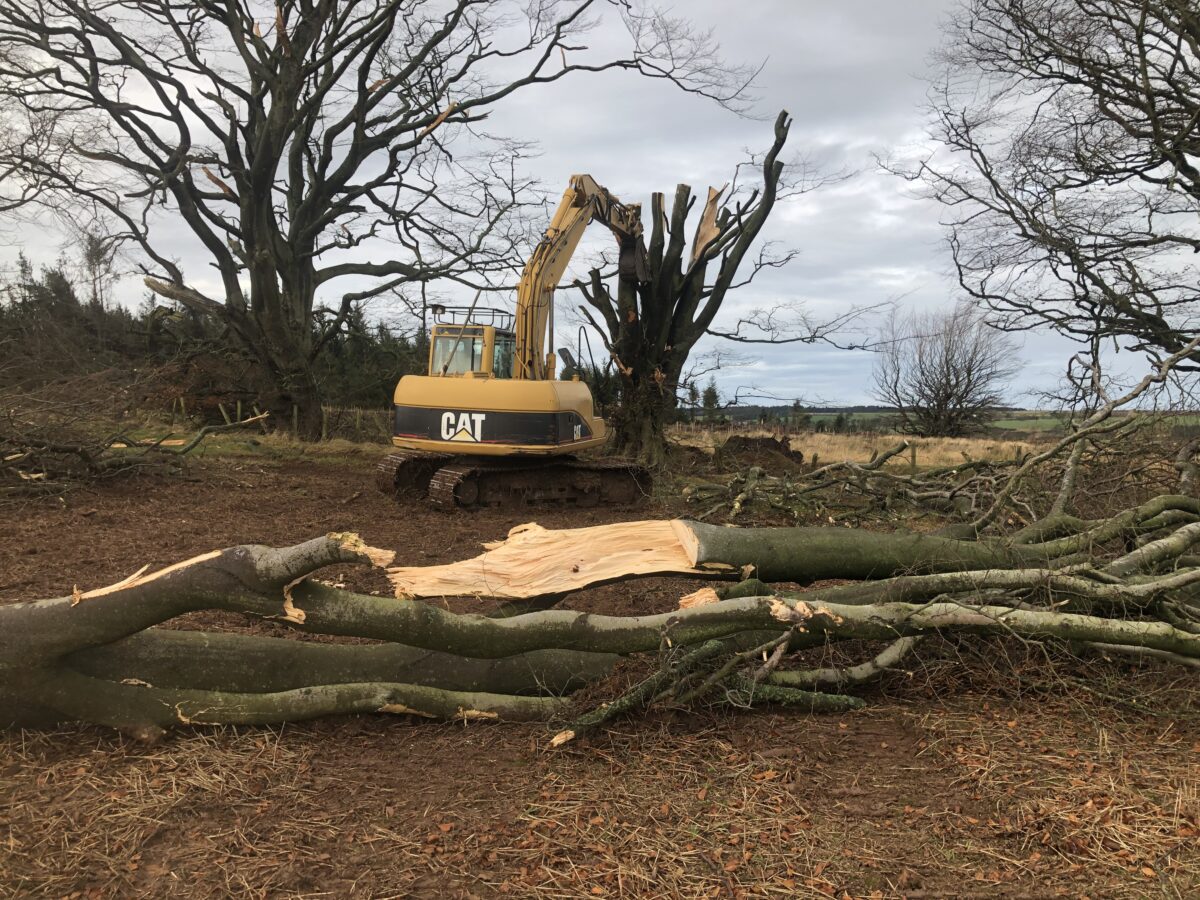 One of the dangers of this sort of work is that, once freed from the upper branches which have weighed the tree down, the remaining stump can spring back and this can happen suddenly so great care needs to be taken. However, it also presents a possible opportunity and, in some cases, Roy was able to stand the trees back up and recover the half-attached root plates. We have left these standing stumps in place, hoping they may re-establish in some way, but if they don’t, they will remain as testament to the majestic trees which once stood there. 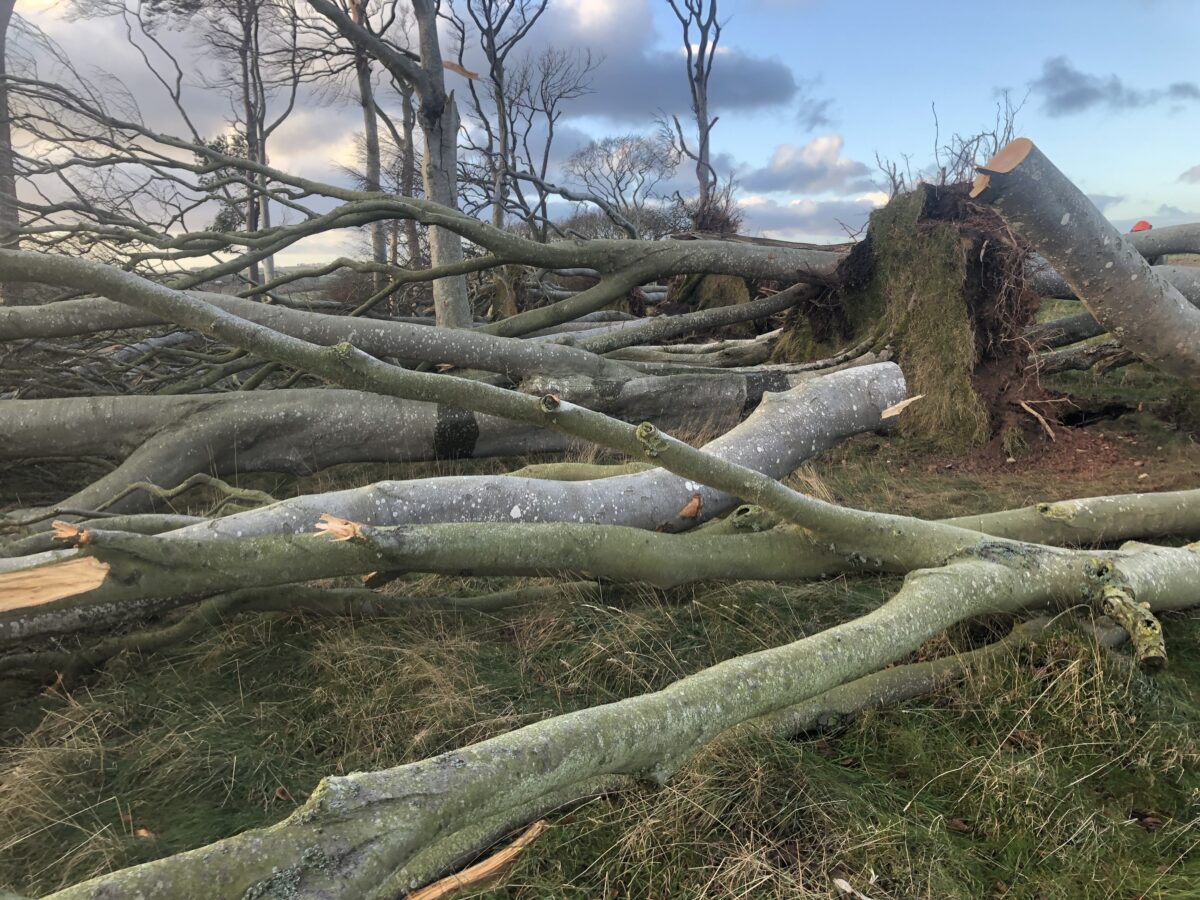 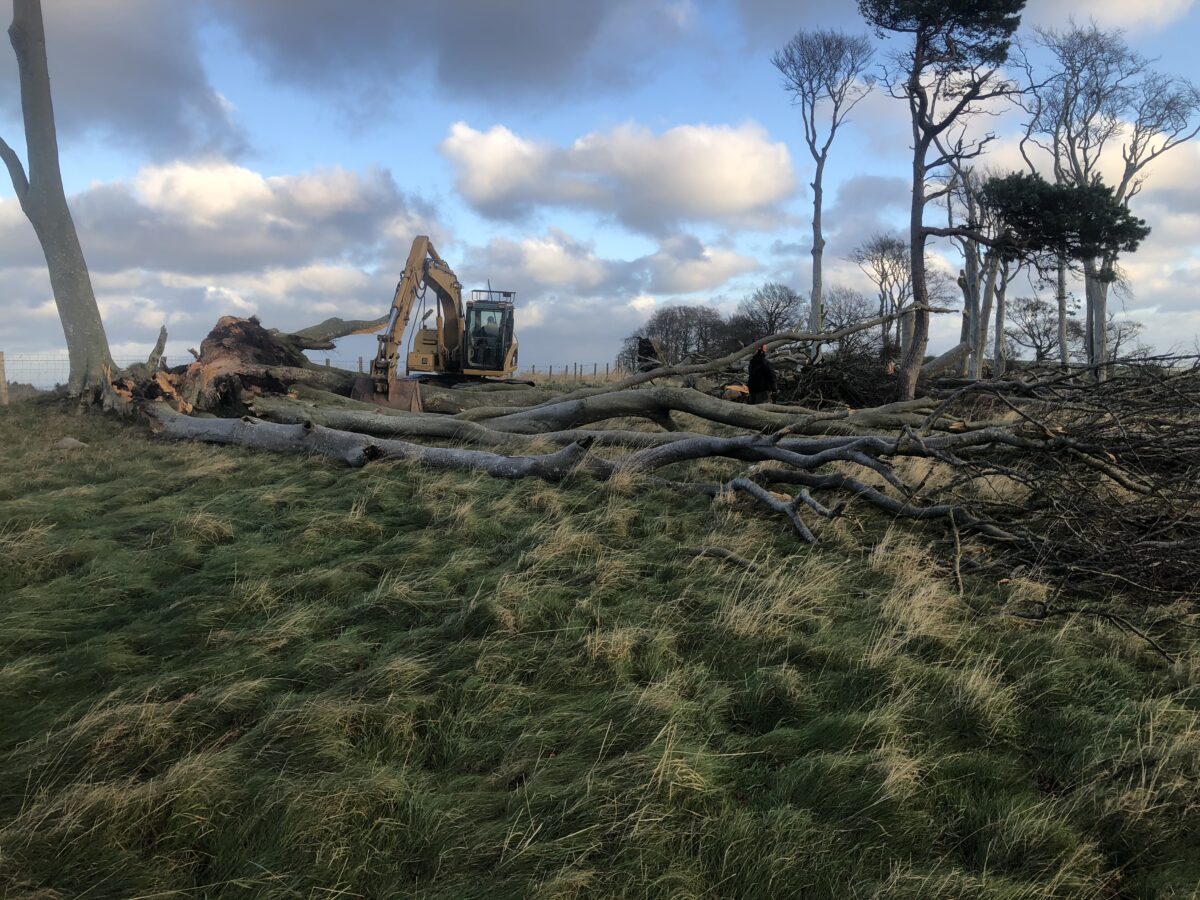 It is not always easy to understand why some trees fell while others managed to stand amongst the devastation. It is thought that, because our prevailing wind is usually from the South West, the majority of trees had established their root systems to accommodate this. So, when the wind came from an entirely different direction they simply could not hold on. Older trees with heavier branch canopies certainly seemed to have been more vulnerable. Thankfully others, for whatever reason, were able to stand firm.

The full clear up will take years and, if you walk around Press Mains this year, you will see evidence of the great storm which caused so much chaos, particularly on the higher ground. However, you will also see woodlands, albeit with fallen trees lying within, and also many mature trees still providing habitat for a diverse range of wildlife.

As we get ready for the opening up of the cottages in the near future, it is time to reflect…

In many ways 2020 could not have been more different to last year. The pandemic has brought about a lot…

Check availability and book online using the table below.